The Book Fair as a Podcast: Talkin‘ about a Revolution 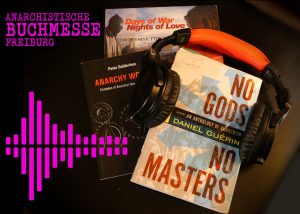 Another (german) lecture is ready for you! The Topic of  „Talkin‘ about a Revolution“ is social Revolution. What that is, why the concept is important and what we can learn from it for our activism. In times of social distance, considering the social dimension of an emancipatory project is well worth it.

The lecture was recorded on the 24.10.2020 and you can listen to it on the website of Radio Dreyeckland.

The Book Fair as a Podcast: Corona and Democracy

It’s been a while, but here once again a longish audio to listen to, although in German again (sorry, but whisper translations are hard to record…). The topic this time is fitting to current debates around second and third lockdown in Germany and the voices calling for an end to the state measures: Peter Nowak and his reading of Corona and Democracy, recorded on the 24. October 2020 by RDL and online here for your enjoyment. The first part encompasses the reading, the second audio are a few more thoughts from the discussion afterwards..

The Book Fair as a Podcast: Cyber Valley

Another week, another lecture to listen to on Radio Dreyeckland. This time the German book reading on “Cyber Valley – Production Context of Artificial Intelligence”.

The Book Fair as a Podcast: Left of the Left

Another (German) audio from the book fair, which you can listen to here at RDL: “Left of the left – Sam Dolgoff and the radical US workers movement”.

The Book Fair as a Podcast: The Circus of Justice

Today we’re publishing the Audio from the scenic reading of the “Circus of Justice” about Resistance and the justice system. You can listen to the german audio on Radio Dreyeckland.

The Book Fair as a Podcast: Food for Future

The anarchist book fair 2020 has passed quickly and Corona has brought us another ban on all types of events. Thankfully some people had recorders with them at the book fair, and we can offer some of our events as audio podcasts. Here we’d like to present the first of several to come, the lecture of Food for Future. You can listen to it here, on  Radio Dreyeckland. The audio is German only (sorry).

A first review of the book fair

The anarchist book fair from 23.10-25.10 could take place despite Corona with hygiene measures and good mood.

We look back on three days full of a colorful program, even though the concerts in the evening had to be cancelled due to the current corona situation. However, there were also many well-rested visitors* and orga-men.

At noon there were extended breaks in the sun and delicious food from the Mole Cooking Collective and the Kurdish Küfa, while the evenings ended with a small drink and on Sunday even at the campfire.

On three days there were workshops, readings, information events and D.I.Y. program items, such as linoleum printing, prisoners’ discs and an open screen printing workshop. There was also an exhibition on the Kurdish struggles in Rojava, house fights in Freiburg and an exhibition on adbusting.

On Friday the book fair starts with a reading of the book “Food for Future” and a scenic reading with the title “Circus of Justice”. For the early risers*, the book fair continued on Saturday at 10:00 with the opening of the many book stands and several exhibitions, while the program on Saturday, usually with three parallel events, also stretched into the evening hours.

After several well-attended lectures and readings, the book fair ended on Sunday in a round conclusion. Numerous visitors* helped with the dismantling of the exhibition, so that only a few hours later it looked as if nothing had happened – although everyone who was there knew how much happened that weekend.

What remains now are many new books that people want to read, a lot of input from the lectures, which are thought about every now and then, many new acquaintances and beautiful, shared moments and joy about how well the D.I.Y. concept worked with the shift plans and that everything was distributed on many shoulders during this weekend. Also, after a long (social contact) break, Corona allowed us to take a deep breath and recharge our batteries for political struggles, despite having to wear masks.

We thank all background structures and the many motivated helpers* for cooking, cleaning, numerous awareness layers and of course the speakers* and bookstalls for their political contributions!

On Friday, the book fair starts! 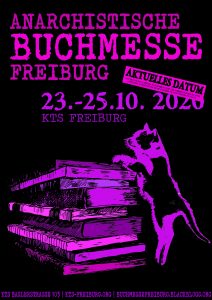 It’s starting? Yes! Despite other rumors we can let the book fair take place – but with only 100 guests* at the same time and this year without concerts. A pity, but better than nothing. Helping hands are still wanted, by the way, so please contact us or ask us on site if you feel like helping out. For the shifts there are training meetings, for infopoint and Awarness these are obligatory.

Unfortunately our website has been down lately, we hope that this will be solved and you can inform yourself here again. You can also find all events on kts-freiburg.org or tacker.fr and there is also a program booklet on site.

About Corona, we already informed you about some things, here are the important current rules for the book fair:

We will also have to ventilate a lot – accordingly, it will be as warm inside the building as it is outside. Dress warmly and bring a blanket with you!

We are looking forward to seeing you. Until Friday!

Slowly the date is getting closer and closer and our event program is ready! You can browse through it and think about what you want to do. The list of publishers is not quite up to date yet, but you will find the current status there shortly.

The elephant in the room: Corona.

As you know, the situation is rather shitty because of Covid-19. Actually, we wanted to have a book fair where everybody can participate, which won’t be possible under the circumstances, but postponing it indefinitely is also nonsense – so we’d rather have a book fair with some restrictions. To make sure that the whole thing is as safe as possible, we have to ask you to follow some basic rules. We know this is annoying, but for the health of our comrades* it is worth it.

And some last information:

We have a shift schedule for people who want to help to realize the book fair, if you can imagine doing that, please write us! We need people to carry drinks, help cooking, be at the infopoint, set up and clean and much more.

You can also contact us if you can offer sleeping places for comrades! Many people will surely be very grateful for that.

See you soon, we are looking forward to it!

Posted in Info | Leave a response

Autumn is looming ever closer and with it the book fair.

Despite every passing day seeming hotter than the last and everyone being in their summer mode, we here in the south-west are already thinking about the coming autumn and with it the coming book fair. Of course, we cannot foresee whether there might be another lock-down and everything has to be canceled, but we can adapt to the circumstances and have enough time to devise a hygiene concept.

Between the 23rd and the 25th October we are planning to have a mixture of books, lectures, workshops and a cultural program, and are currently busy with invitations, organizing things and compiling an enjoyable program. More precisely, as we had already planned in April, we will be starting on Friday with a reading and the cultural program. Then over the weekend there will be several workshops taking place simultaneously in different slots, which will be followed by concerts in the evenings. We would also like to organize a Küfa (kitchen for all), so that everyone’s culinary well-being can be taken care of. Take note of the dates, tell your friends and come by!

If you have any questions or comments, just write an email to infoladen [a t] kts-freiburg.org (preferably encrypted)